Hey there,
In for another in-thread writing contest? The second edition is now hosted by Hannah, the winner of the last Blogger Coffee Shop Writing Competition. This edition is another 150 words – of which 5 words randomly picked and obligatory – challenge.
These are the rules, as quoted from the fabulous Hannah:

5 words will be chosen randomly through here; http://watchout4snakes.com/CreativityTools/RandomWord/RandomWord.aspx

You have to construct a story that incorporates all of the 5 words, and is exactly 150 words in length all together.

You will post your story as a reply to this thread. For the sake of clarity, you will italicise the entire 150 words, so that the stories are easy to spot as one scrolls through the thread, and you will bold the 5 random words in the story.

An entry that is not 150 words exactly, that has not been italicised, and that has not bolded the target words, will be ignored, because I just cannot be bothered to sift through everything and find stories and/or words in stories.

The winner is determined by how many 'Yes, this answer is helpful' votes she or he gets. Any 'No' answers will not be taken into account, because seriously, stop being petty.

The competition ends a week from now (IE; Next Tuesday), at whatever time I can manage to get online.

The winner of this competition will host next week's competition, and be declared winner on Stories Inc.'s page, with their winning entry posted, as well as a link to their blog.

(Example entries can be found here, if you're still unclear about the rules; http://www.google.com/support/forum/p/blogger/thread?tid=6576a96d76aeb054&hl=en. The 'italicise entries' rule is new, that's why the entries here are not italicised.)

You can enter the competition by posting your entry here.
Good luck to all of you and I’ll be looking forward to reading all of your entries at the Forum ;)
Posted by Stories Inc. at 10:59 No comments:

Writing Competition - And the winner is... (drum roll)

And the winner of the first Blogger Coffee Shop Writing Competition has been revealed:
Hannah
Hannah wins, apart from all our awe and respect, this fabulous award, which she can show off in her virtual trophy case. 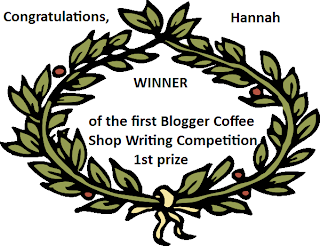 To see Hannah’s blog or to go and congratulate her yourself: www.scornfulprose.blogspot.com
This is her winning entry:
"I closed my eyes and thought hard. What could I do to remedy the situation? I didn’t want her to leave, of course I didn’t. But I couldn’t just let her wave her monopoly over my emotions right in my face, could I? I had to maintain some pride, some dignity. If only she hadn’t been such a bitch, such discipline wouldn’t have been necessary.
She could report me. I hadn’t thought about that. I’d be in a whole heap of trouble then. Shit.
Breathe, Hannah.
I didn’t think I could subject myself to that train of thought any longer without doubling over in panicked nausea, so I turned my mind to more pragmatic concerns. What now?
There was nothing else for it. I raised my weapon-wielding arm, and brought it down, hard. The crunch of bone, and the crimson spray on my face told me that it was done."
And I have to say the competition was great for this first edition (click to see the other fabulous entries) and will no doubt be greater still for the next edition, which will be hosted by our talented winner. Keep an eye on the forum for the challenge.
All best wishes,
Stories Inc.
Posted by Stories Inc. at 06:47 2 comments:

Hello, bloggers!
In for a little challenge? I just started a writing competition (a really tiny one) in the Coffee Shop. To enter, go to this thread and write/post a story of 150 words containing the words remedy, subject, monopoly, report and discipline as your answer. The winner will be determined by voting in the forum (result on Saturday, you can submit till Friday). Good luck to every participant! Here’s an example:
The Vial
He carried the vial across the street like a torch. All his life he had looked for it, this remedy... Those that called him mad and left, the lonely years, the humiliation, the deceit, the betrayal, all the sacrifices he made ceased to matter, accumulating in his outstretched hand.
“A monopoly!” The CEO said, a trace of drool along his chin.
“The report was promising: every trace gone in each of the subjects.”
“Lovely.” He listened only to the coins ringing in his head, rubbing his hands. “The Holy Grail of the discipline, mine.”
He groped for the vial with eager claws. Somewhere between vigour to obtain and reluctance to let go, the vessel was flung through the air.
Frantically reaching for it, their hands continued to clash. Both men held their breath as the beautiful crystal of dreams with a jingle like heavenly music, scattered into a thousand pieces.
Posted by Stories Inc. at 05:44 4 comments:

Applause
Three minutes of fame was all she asked for: Three. Minutes.
A crew member signalled to her: “you’re up in two!”
She nodded. Deep breath. She shook her arms, shoulders, getting ready for the moment. Standing in the opening to the stage, the arena, she heard the crowds roaring, stamping their feet; her audience, impatiently waiting for her. A bell was struck.
Suddenly, insecurity crawled up on her. Should she smile or keep a straight face? And what kind of smile should she use, mysterious? Or laugh widely, cheerfully, girl-next-door style? And her eyes, how should her eyes... She should be tempting, beckoning, maybe a slight bit naughty?
She plunged forward from the curtains, enshrined in spotlights, and strode across her private catwalk, making her little turn in her leopard print bikini and held up a sign saying “Round 2”.
Applause resounded.
Posted by Stories Inc. at 06:46 8 comments: