'The Gift's Curse', a typographic poem from my early days

As far as I know, this is my oldest poem in English. It's from all the way back when I was fourteen. As you may be able to tell from the ordering, I was heavily into experimenting with form and typography, as is even more apparent from my Dutch poetry at the time, which according to my teachers shared resemblance to that of the famous Flemish expressionist poet Paul van Ostaijen, who I had never even heard of at the time. Without further ado...
﻿

The Gift’s Curse
burning
scorching
on the inside
the inside of me
crawling up,
up,
back down again
filling with fire and flame
searching, striving
for a way out
out of the cage of my body
the gate of my lips
my hands
it stirs in my mind
flows out of my pen
out, out!
somewhere, somehow
it shall not be stopped
for it does not obey,
does not hold back
… never gives up
no rest,
no sleep,
no more sanity
the Muse’s fire and flame
their painful caress
pushing, forcing…
to their will
I must comply
no choice,
no power,
it is a part of me,
O rebellious flames
Tortured,
giving, taking
offered to a price
the fire in me,
controlling
steering me.
I am the fire!
﻿
Posted by Stories Inc. at 00:00 1 comment:

The Great Evanescence - a poetic story

Alright, I should be doing a post on the awards I got now – especially the ‘versatile Blogger’ one came with rules I haven’t followed yet – but I just finished this and simply can’t wait to hear other people’s thoughts on it... So, sorry, Taylor... What the heck, maybe there will just be two posts today.
When I started writing this, I was determined to write a story, but since I’m still switched on to poetry (that happens from time to time, the two alternate), I ended somewhere in between a story and a poem, which I suppose has a charm of its own. I think if I let this one simmer for a few years and rework it, it could be great. For now it just happened. Please let me know what you think in the comment section.
Cheers! The Great Evanescence, a poetic story
Though I am old and from long bearing torn from mould,
it feels as though it were just yesterday
when a child I met young Mason Gray.
I was a boy, no more, and full of fright
until one day I lost my way
on a whimsical starry night.
I wandered through a moonlit street
for hours on end
until by chance I got to meet
a boy who’d be henceforth my friend.
There was no house in sight, no hunk of car
and I could see clearly a shimmer from afar
and ran towards it intoxicated
to where the strangest creature waited.
Beneath a lantern stood in ghostly light, all set aglow,
a boy whose face served but to show
the world had not yet killed its verve
and angels would still walk the earth.
I stumbled forward quite in awe
the creature stretched its well-shaped claw
and though his burning gaze revealed a fire mean,
smiled the sweetest smile I’d ever seen.
I like a moth drew ever nearer
for nothing to me ever dearer
then in that sacred flame to smoulder
and so my eyes turned even bolder.
His cheeks the softest crimson blush,
his lashes lush
his skin the purest peach and cream
his eyes as bright as in a dream
tainted by fever great
I met this fairy child of late
tolling a heart-shaped jojo in ennui
at an hour only demons roam free.
When the world was rather dim
this mystic child of light beckoned to come with him
and so I did and together we would knit
the wildest lore forevermore.
Games new and old we’d play
and from the village led astray
we roamed from meadow, bush to wood
where we would act out Robin Hood.
There we would, with sticks and rods,
take for models only gods,
split the forest and feign
to spear even the heavens in our reign.
Until morning bared its teeth
and bit away with pain and grief
at what was our youth
with roses underneath.
All at once the thorns sprung up and marred our face,
robbed us of our innocent grace
and our wondrous camp of clay
faced the stream, was washed away.
Like all things young and fair
my childhood friend dissolved, went up in night air
and left me forlorn in life’s grime
to swallow those sour grapes of time.
And now in death’s shade I stay,
worn from long decay
and as remedy to all that’s gone amiss
have nothing but to reminisce.
Posted by Stories Inc. at 08:58 No comments:

Alright, I realize I'm shamefully late with this, but here's a quick summary of what's been going on with the in-thread writing competitions...So for those of you who were wondering, here's the update.
The 6th edition:
was won by Hannah, who also won the first edition, so that shows what a phenomenal writer she is.
challenge
as always to write a story of exactly 150 words, this time with these 5 target words: Lovely, Vocabulary, Brother, Preserve, Reflection
Hannah's entry

"It was open-casket. I wasn't sure why, my brother looked ghastly. Bloated, pale. Perhaps the mortician was proud of how well he had preserved the body. I suppose he'd done a good job, considering. The two weeks it had spent festering in the woods hadn't done it any favours.
He looked different to how I remembered.
Still, I imagined that I could see accusation and betrayal in my brother's eyes. I lowered my gaze to the coffin, where I could see my reflection in the polished wood as it was lowered. I looked lovely. Lovelier than I had any right to look, given the circumstances.
But his death had been ruled a suicide, much to my relief, and now I didn't have to share my inheritance with anyone. Who wouldn't be happy? I felt a smirk tugging at the corners of my mouth. I guess 'compassion' wasn't in my vocabulary." 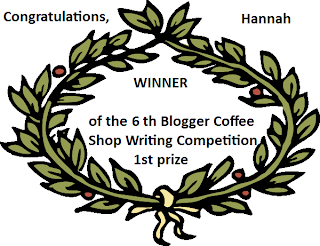 The 5th edition:
was won by Victoria P., who finished way ahead of nearly all of the competition with following submission.
challenge
write a 150 words story using these 5 words: riding, questionnaire, dictator, troop, penguin
Victoria's entry

"The room looked white and sterile, resembling a doctor’s office in all the wrong ways. The girl next to me was fidgeting nervously and frowning over a sheet of paper. Chill out, it’s not like your life is riding on the freaking job!
Ugh, the inevitable pre-interview questionnaire. I never understood what exactly they were hoping I’d answer to “Where do you see yourself in five years”
“I will have achieved the position of Global Dictator, following the creation of my troop of killer penguins by a team of paid geneticists. Having gained access to all of the Earth’s resources, I shall invest in a program to explore deep space and eventually start my Intergalactic Empire of Evil. And Cheese. This illustrates my superior leadership and communication skills.”
-         Miss Jenkins, Mr Barnes will see you now.
I stared at the blank sheet on my lap. One of these days…"

award
And here is is Victoria's well-deserved virtual trophy: 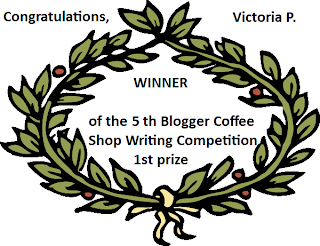 The 4th edition:
Alright, let's cut this short: I won, so I officially declare myself winner... Now I have something to tell my shrink about... *awkward*
You can read about the challenge and my entry to it - 'Mistaken Genius' - here. 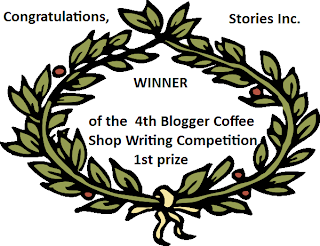 Alright, lets wrap this up: third and final part. Northern winds
stirr my bones
and bruise my skin
from now on there can only be
autumn leaves
in me.
Posted by Stories Inc. at 04:01 1 comment:

This is part 2 of 3. It is a set, but they are rather loosely connected, they don't make up one story in themselves, merely a whole under 'the ultimate ungraspable'. They were originally all part of one very long poem, at least that was the idea, but I split them up and gave each autonomy - despite the thematic link of 'autumn' - though they were written in immediate succession, if there was the complete separation implied by that at all. they are also on different events, not just the one. 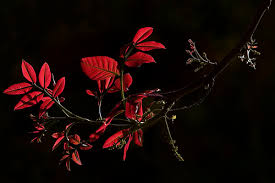 winter's chill too much to bear
smearing car-crash crimson
all over my veins
my moods a haze
you struck me colour-blind
seeing only autumn
in every spring.
Posted by Stories Inc. at 04:27 No comments:

The ultimate ungraspable (I) - elegiac poem

So it's a bright sunny day, still chilly, but you can feel spring in the air all around and that does something to people, especially after such a dreary winter. So what do you do on such a fine long-awaited spring day?
Write elegiac﻿ poems.
Why?
Because I'm twisted, that's why. Oh, that and the fact that I'm running a fever and going practically hallucinatory on pain killers, which could at least have something to do with it. The ultimate ungraspable (I)

Spring lulls drowsy memories
washed ashore by time's tempest
a summer when all things green
sprung up in mutiny
and froze
drawing blood from July's unmarred face
skin-deep crimson waves retreating
revealed nothing but
a wasteland of barren branches
humming elegiac lullabies
I lay you down to sleep
yours shall be
forever autumn
in me
Posted by Stories Inc. at 08:58 4 comments: